The history of Francisk Skorina Gomel State University can be traced back to 1929, the year when Gomel Agricultural Pedagogic Institution was established by the resolution of Central Electoral Committee of Belarusian Soviet Socialistic Republic (BSSR). According to this resolution, the Board of Public Commissariat of Education of BSSR on March 7, 1930 decided on the profiling of Gomel Institution on three directions, that is social and historic, literature and linguistic, physical and technical directions. Up to 1933 the training of school teachers (2-years of study school) was organized on the basis of the Institution. In 1933 the Institution was transferred into 3-years study pedagogic institution. In a year the Institution was reorganized into Higher Education Institution with 4-years study curriculum which presupposed the training of teachers of Mathematics, Physics, Chemistry and Natural History. On March 5, 1939 by the decision of Presidium of Supreme Council of BSSR the Institution was named after famous pilot V.P. Chkalov.
During the years of its existence the Institution turned out about 13000 highly qualified specialists of various spheres of national economy, the considerable results were achieved in the sphere of science. The Resolution № 93 of Central Committee of Communistic Party of Belarus and the Council of Ministers of BSSR (dated March 14, 1969) on the transformation of Gomel Pedagogic Institution into Gomel State University (the second Belarusian higher education institution of such a high rank) can be considered as a high recognition of the Institution staff activities.
By the resolution of Council of Ministers of BSSR dated November 29, 1988 for its achievements in studying, research and enlightening activities in the sphere of cultural heritage of Belarusian people the University was named after Francisk Skorina, Eastern Slavic and Belarusian printing pioneer.

At present Francisk Skorina Gomel State University is one of the largest scientific research and studying center which has righteously received the recognition of national and international scientific society. The oldest higher education institution of the region has become real intellectual and cultural center of Belarusian Polessye.
The scientific potential of Francisk Skorina Gomel State University is considerable. The total number of staff members is 1458, among them there are 678 academic teaching staff members (without combining of job). Among the academic teaching staff there are 41 doctors, 32 professors, 249 candidates of sciences, 205 associate professors. Among the doctors of sciences there are 4 correspondent members of National Academy of Sciences of Belarus (A.V. Rogachev, A.N. Serdykov, G.G.Goncharenko, V.F. Baginskij).

Post-graduate courses (51 specialities) and doctoral courses (5 specialities) represent labor potential for academic and teaching staff members. Master`s programmes have become available since 2004. There are 4 councils on thesis defense on 5 specialities, including a doctoral one.
The main forms of scientific research activities of GSU are as follow: implementation of fundamental, applied and commercial agreement scientific research activities; organization and holding of scientific conferences and seminars; training of staff members of high scientific qualification; organization and supervising of student science; exhibiting and informational activities on propaganda of scientific achievements via mass media; invention and rationalization activities; edition of scientific literature (publication of monographs, articles, theses, journals, collected scientific works). 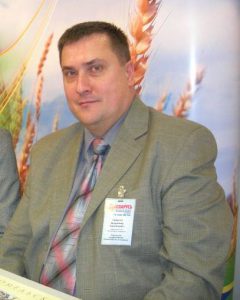 Vladimir Gaishun since 1992 works in the Advanced Materials Research Laboratory at F. Skarina Gomel State University (GSU). From 2001 – Head of Advanced Materials Research Laboratory. 13 March 2003 in Gomel State Universitywas defended dissertations for the degree of candidate of physical and mathematical sciences on a specialty 01.04.05 – optics. From 2005 – Senior lecturer of optics department and from 2017 – Head of Optics department. Research experience in the GSU – 25 years. He has over 170 scientific publications, including 10 patents of Belarus and Russia. He was the head of more than 20 completed and implementation in production research and contract work.
Research interests of Vladimir Gaishun is includes the development of new materials (sol-gel glass clear and unhydrous, sol-gel films, colloidal silica dioxide, powders and et.al.) by sol-gel technology and the study of their optical, structural,electrical, mechanical and antibacterial properties. His research interests in the area sol-gel films include the synthesis and obtaining protective hydrophobic sol-gel SiO2 films with high hardness for solar-collector and solar cells, for application in the paint industry, the manufacture of metal dishes, production of furniture accessories, etc., photocatalytic coating based on zirconium oxide and the study of their properties for aplication in anti-bacterial surfaces, self-cleaning surfaces et.al and formation of nanostructured SiO2 hydrophilic sol-gel films. He is the supervisor of projects of the State program of scientific research in the Republic of Belarus, in particular, the program “Chemicals and Materials”, “The composite materials”, “Nanomaterials and Nanotechnologies” and et.al. He carried out the scientific management of projects with foreign organizations and companies: Korea Institute of Industrial Science and Technology (KITECH, Seoul, Republic of Corea), Korea Institute of Industrial Technology (KITEK, Inchon, Republic of Korea), LG (Seoul, Republic of Korea), Centre for Cooperation with CIS countries (Guanjou, China) and more than 20 years have close connections with the Institute of Low Temperature and Structure Research named W. Trzebiatowski PAS (Wroclaw, Poland).